The drive to Quebec City was somewhat action packed.  We were in the merge lane for a freeway that we weren’t supposed to take and so we need to turn around.  I don’t think my uncle was thinking clearly at that instant because as his car was still in the merge lane (we were following behind him) when he tried to do a U turn.  He U turned from the merge lane onto the oncoming lane (in his unclear thought at the time, he did not see that the lane going the other direction was across the grass that separated the two direction lanes).

At the time, there were no cars, so it looked like it could have been the right way to go.  Then a car came down the slope (he didn’t see this car earlier because he was looking up the slope and the car hadn’t reached the crest yet) at highway speeds and now the two cars were facing each other.  That’s when my uncle realized what he had done.  When the other car saw, the driver quickly slowed down while my uncle U turned back the right way as fast as he could.  He was so freaked out.  While all this was happening, our car stopped on the shoulder to wait for him.  After my uncle did the U turn he stopped in the shoulder lane right behind us.

He took a little breather for a moment and then off we went.  As we merged back into the highway, my uncle I guess was still not fully relaxed because as he was merging back, he failed to gauge the distance properly between his car and the 18-wheeler barreling down the highway behind him.  Close call number two.  The truck braked enough and my uncle accelerated fast enough.  Nothing happened in the end luckily.  Just a big scare.  We all arrived in Quebec City in one piece.

Probably one of the major tourist hot spots in Quebec City.  It is a really nice place.  It’s basically a boardwalk along the St. Lawrence river near the massive Château Frontenac Hotel. 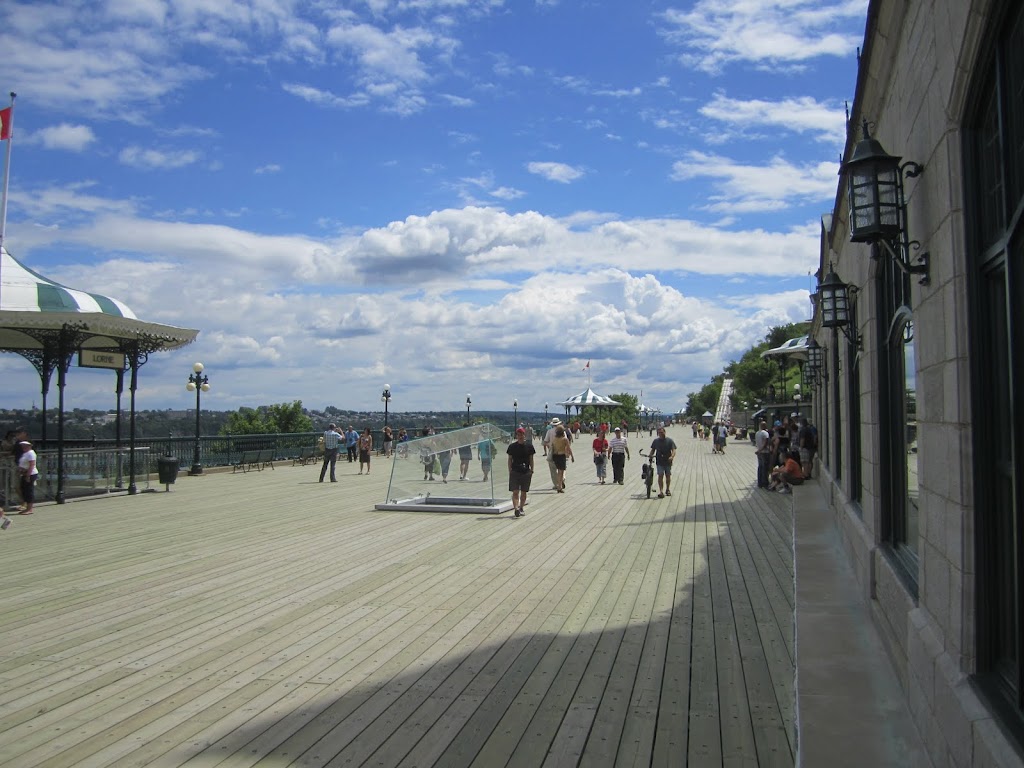 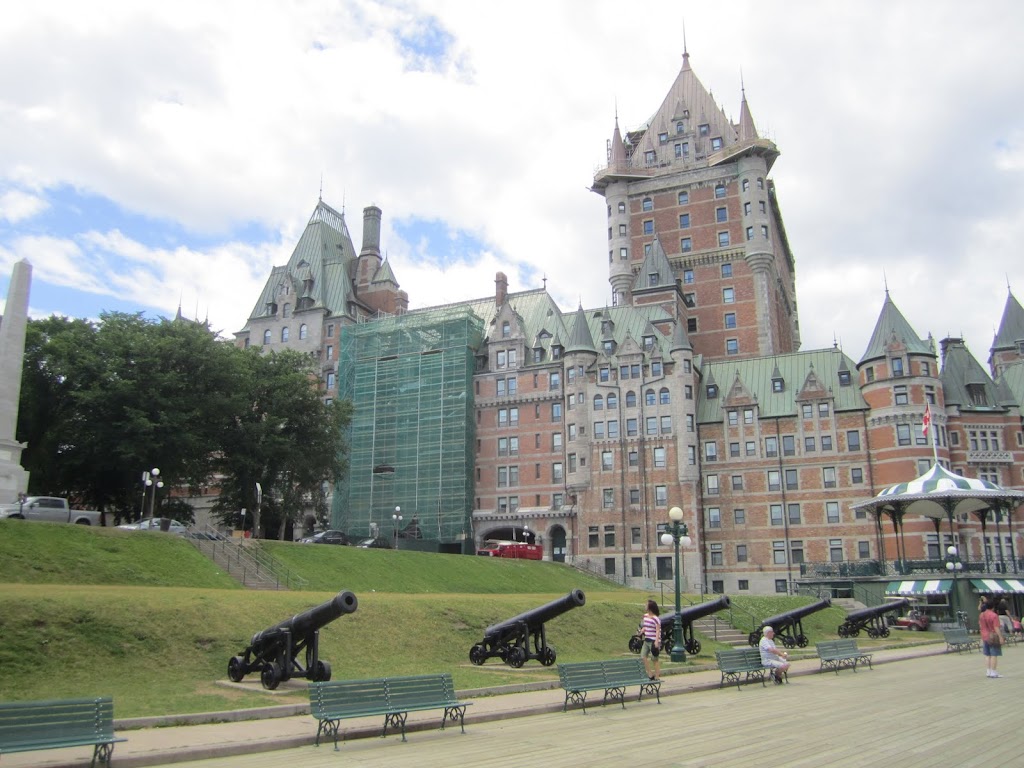 At the end of the terrace, one can look up and see cannons in a fortification.  A staircase nearby (known as the Governor’s Walk) takes people up the hill to the fortification.  It’s a long walk.  It probably takes about 15-20 minutes just to walk from the base of the hill to the Citadelle.  Alternatively, people can drive up there if they would rather not do the exercise. In the Citadelle, there are a lot of narrow walkways with high walls that snake around everywhere (probably a defensive tactic). 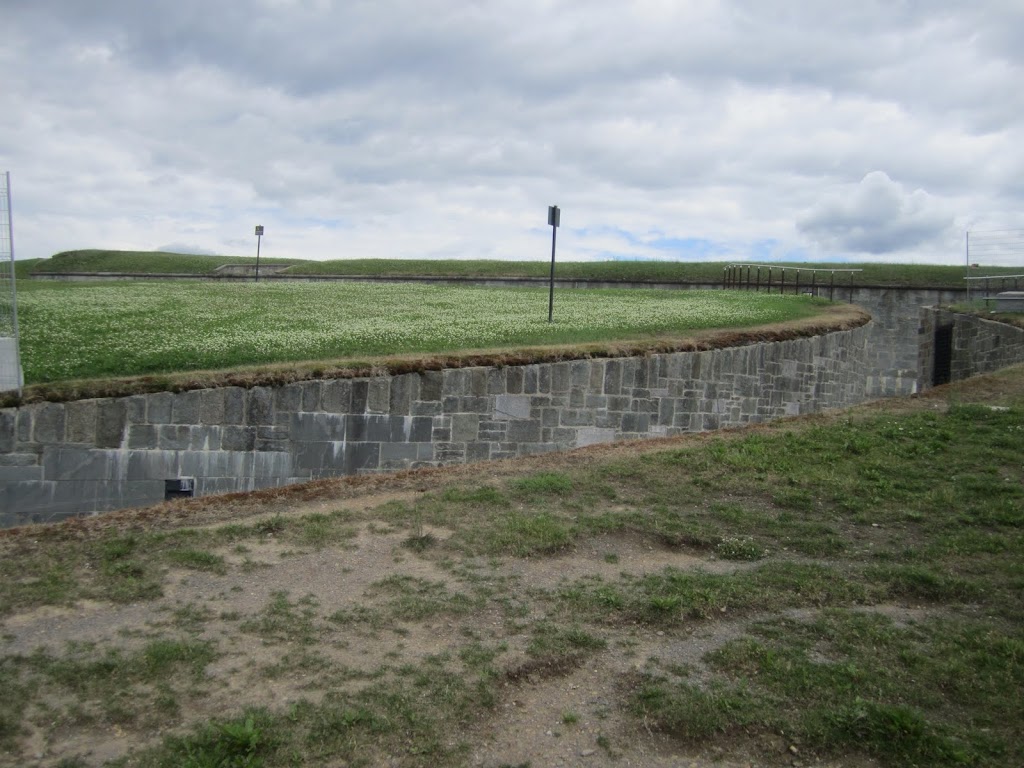 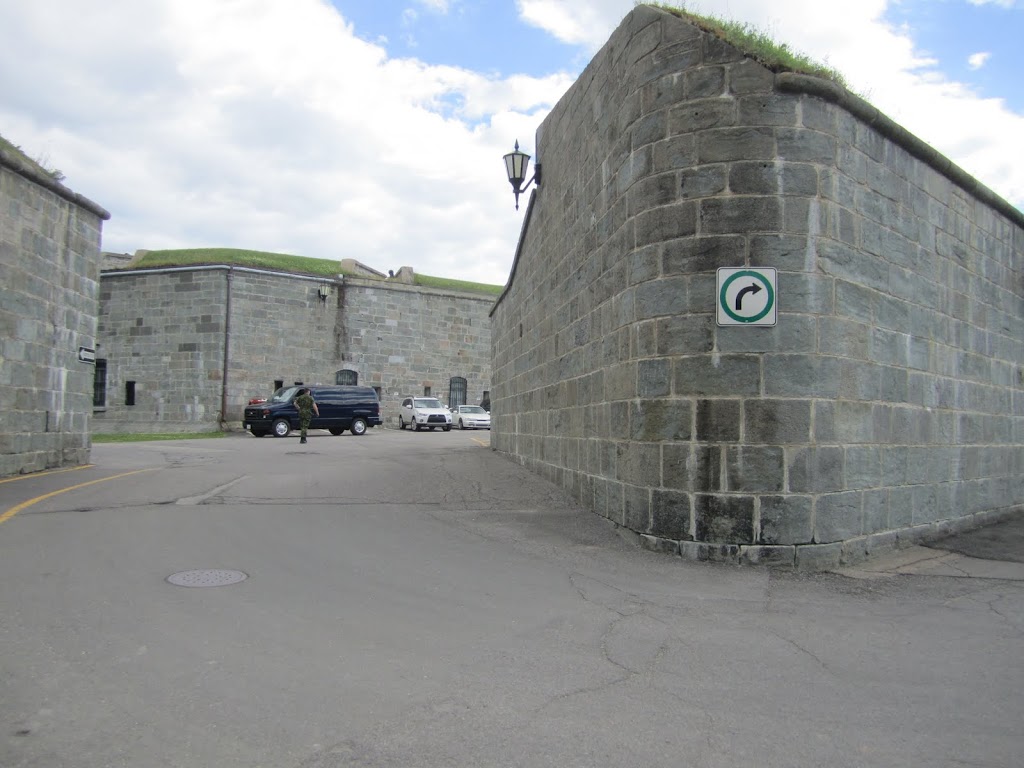 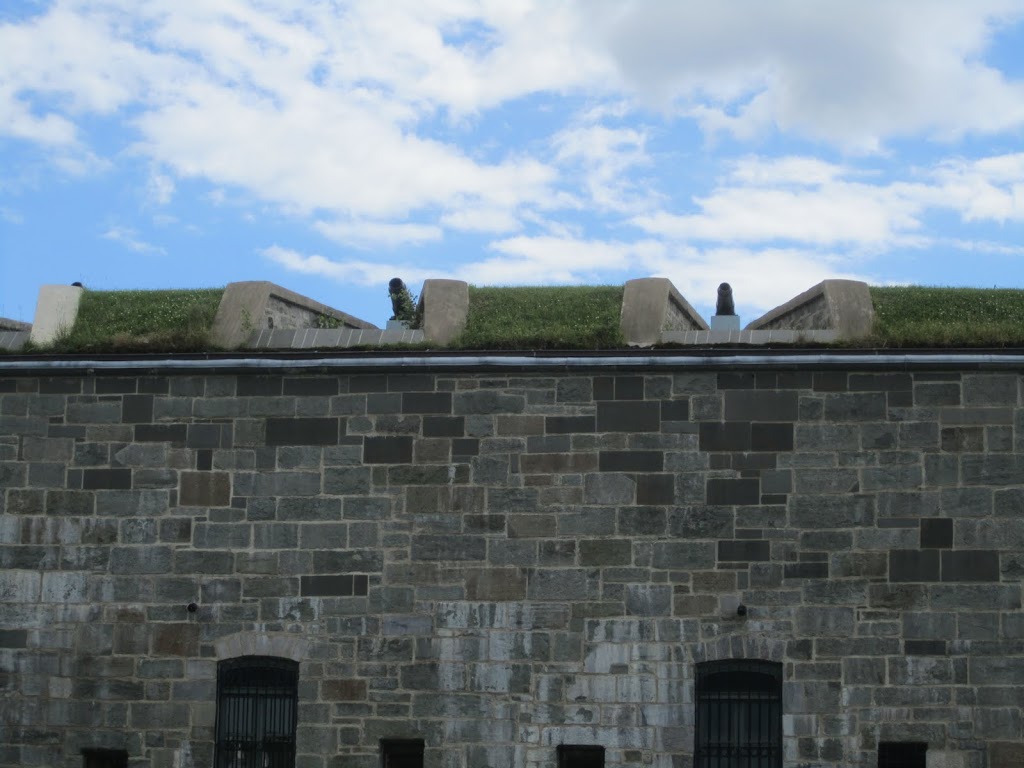 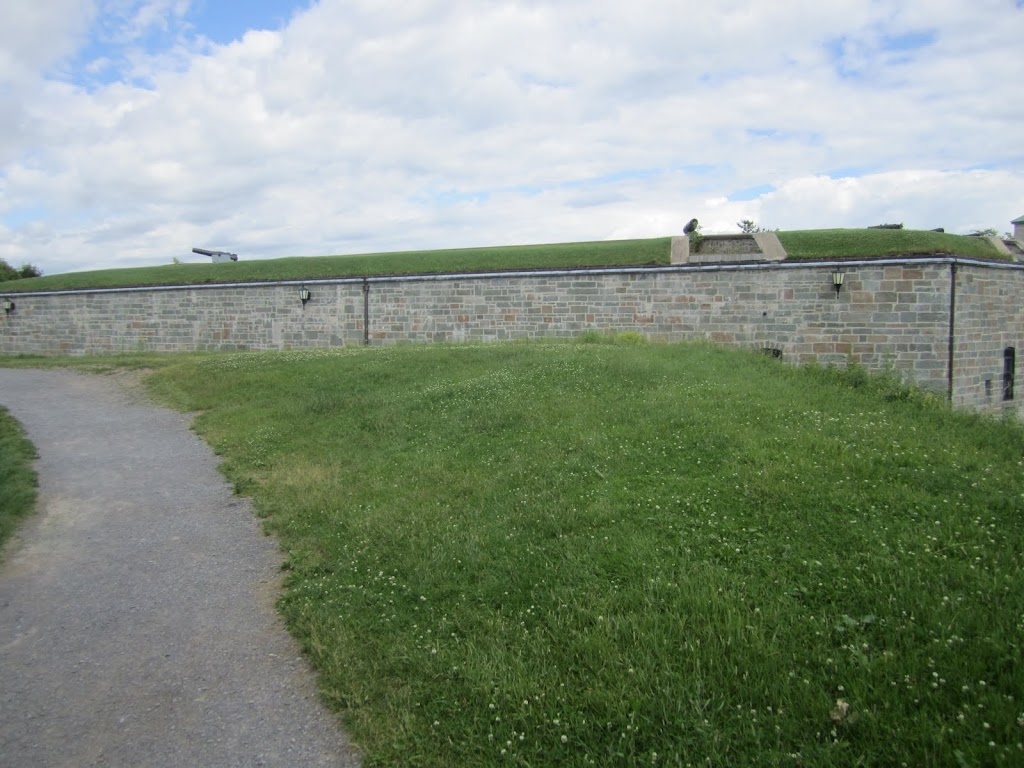 There’s even a guard outside. 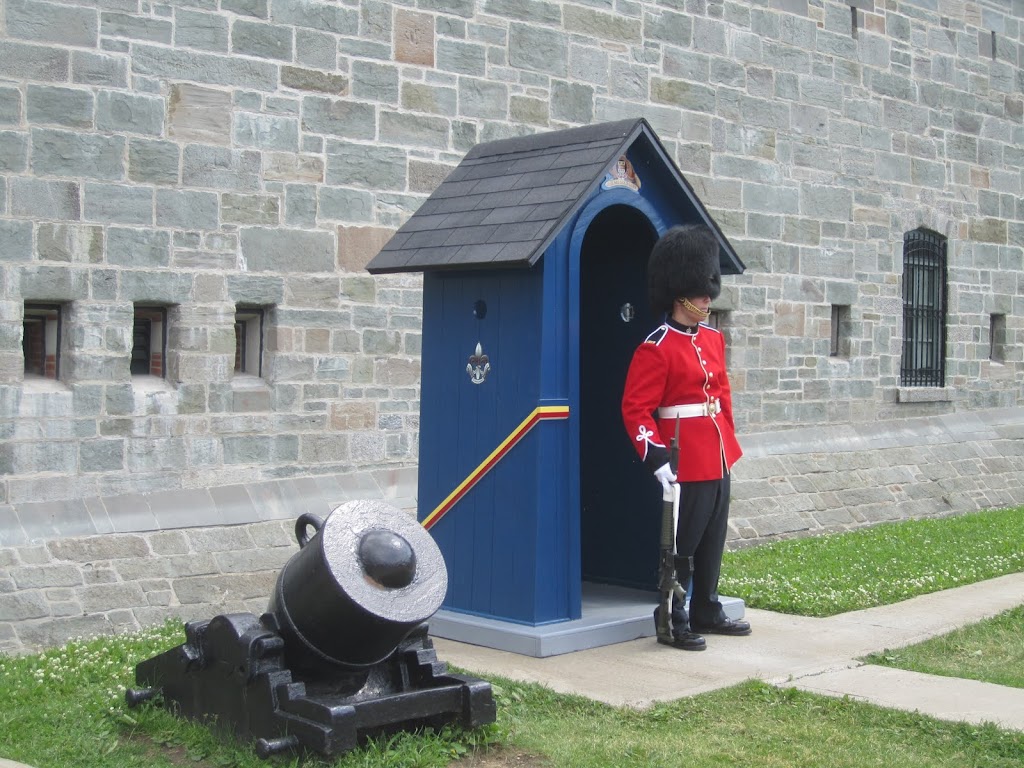 In the main courtyard of the Citadelle, there was a military ceremony happening so we couldn’t roam around. 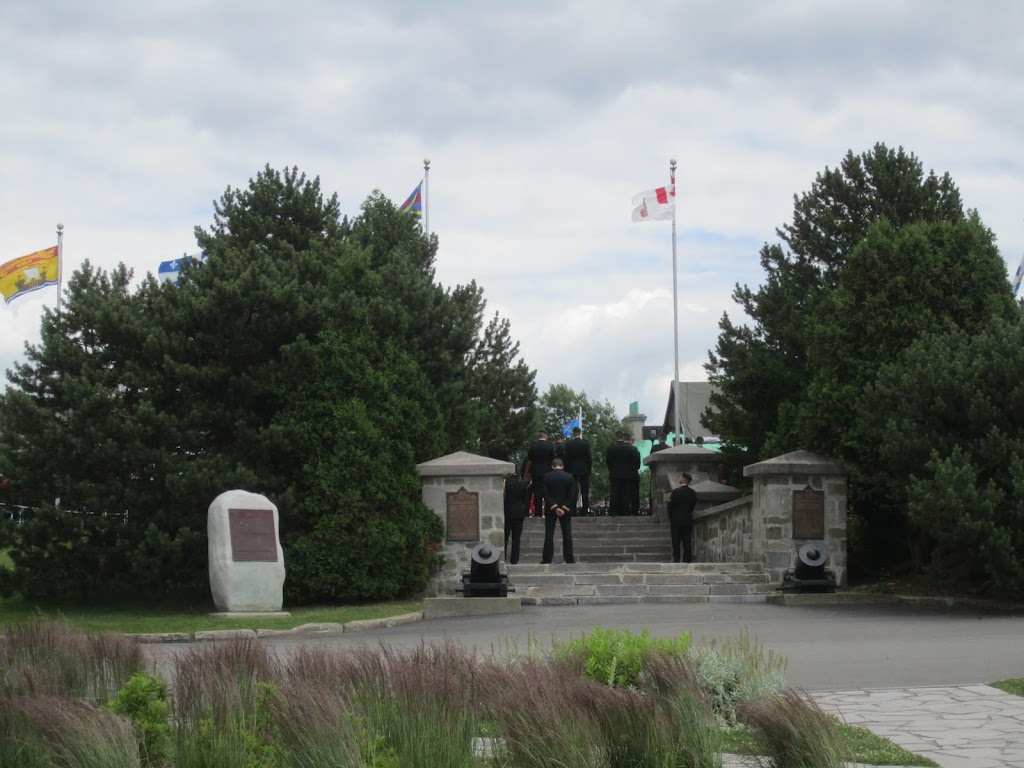 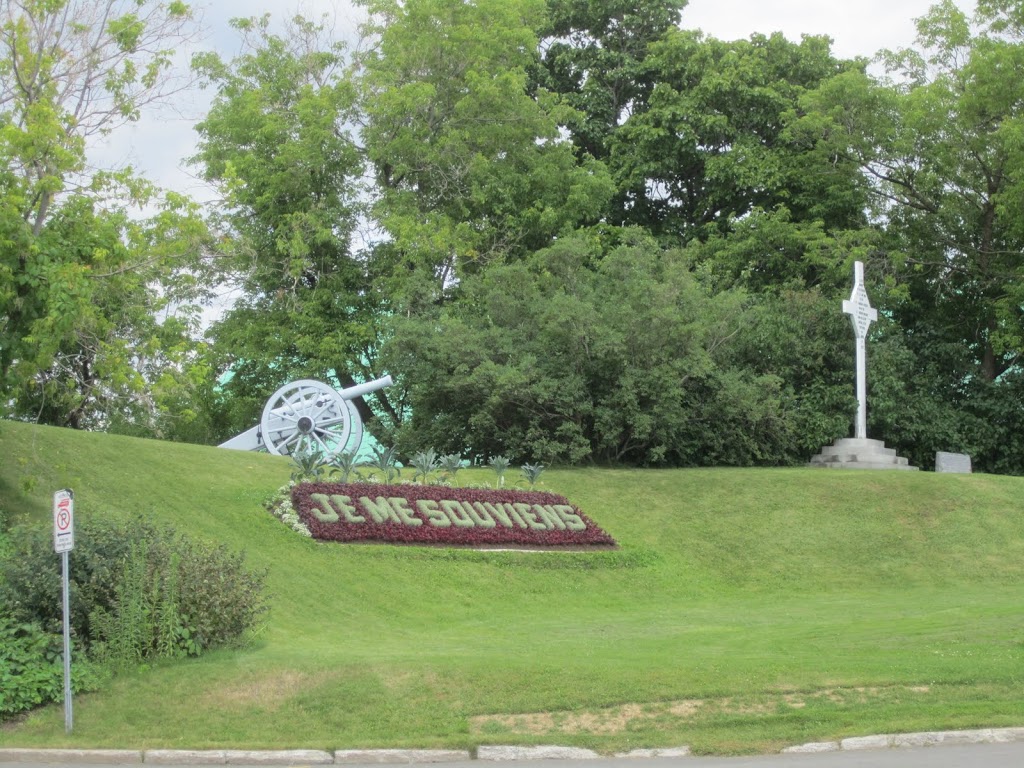 From up there, we got a really good view of the terrace and the chateau. 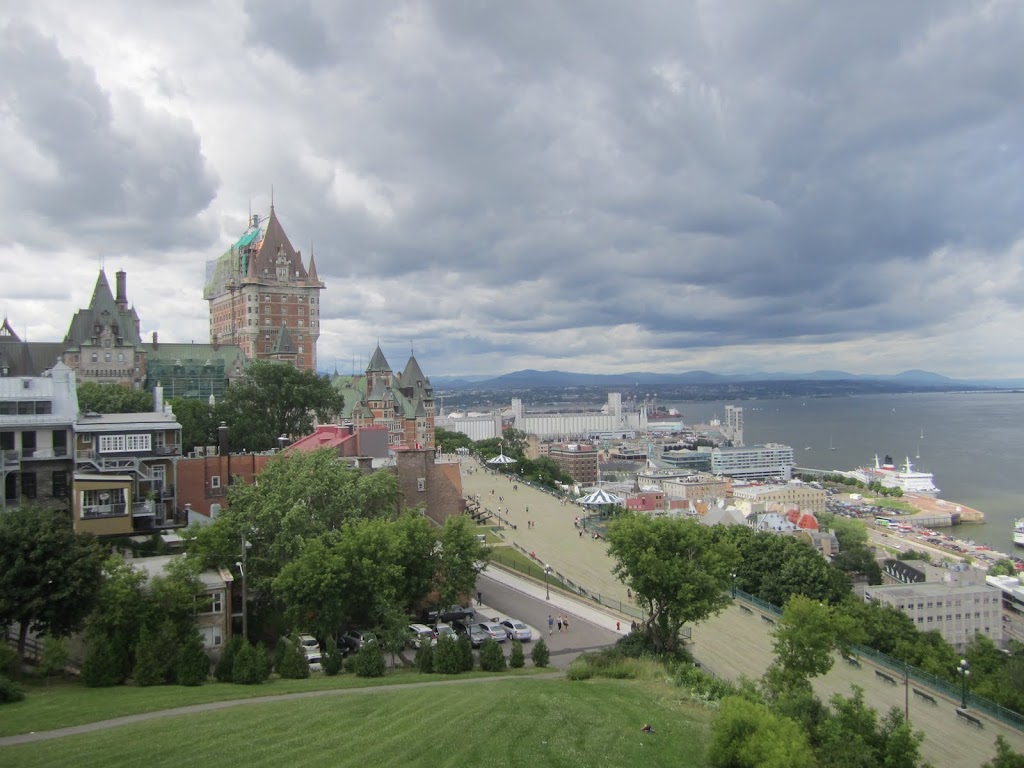 And because of the military ceremony, there was a parachuting performance! 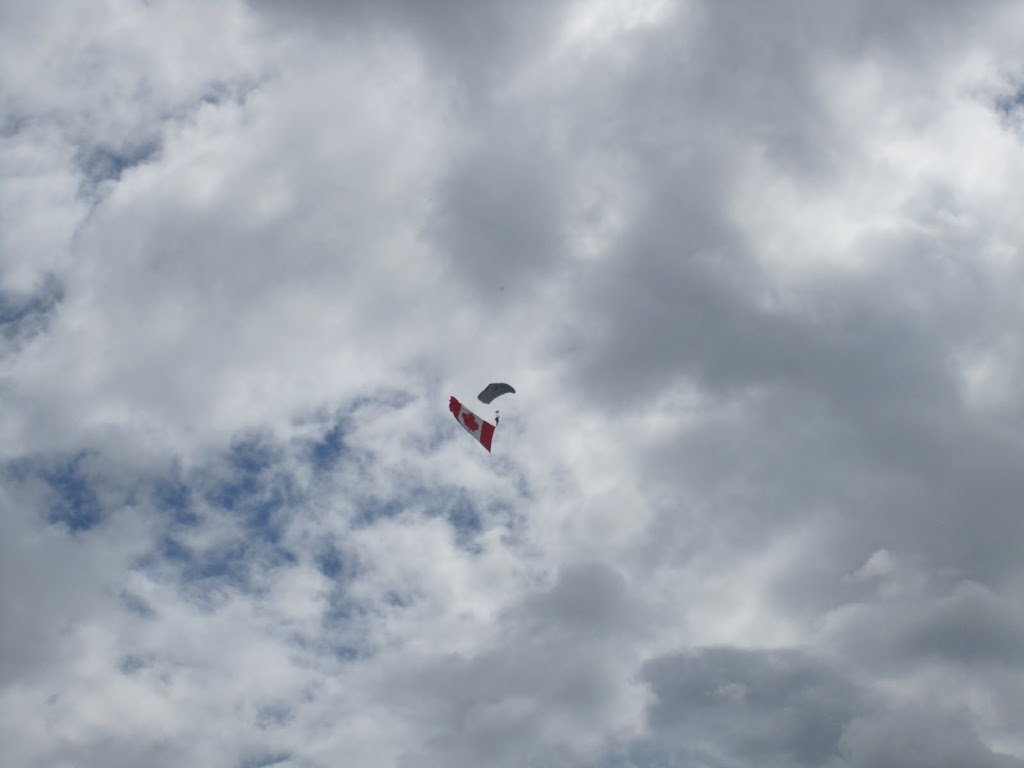 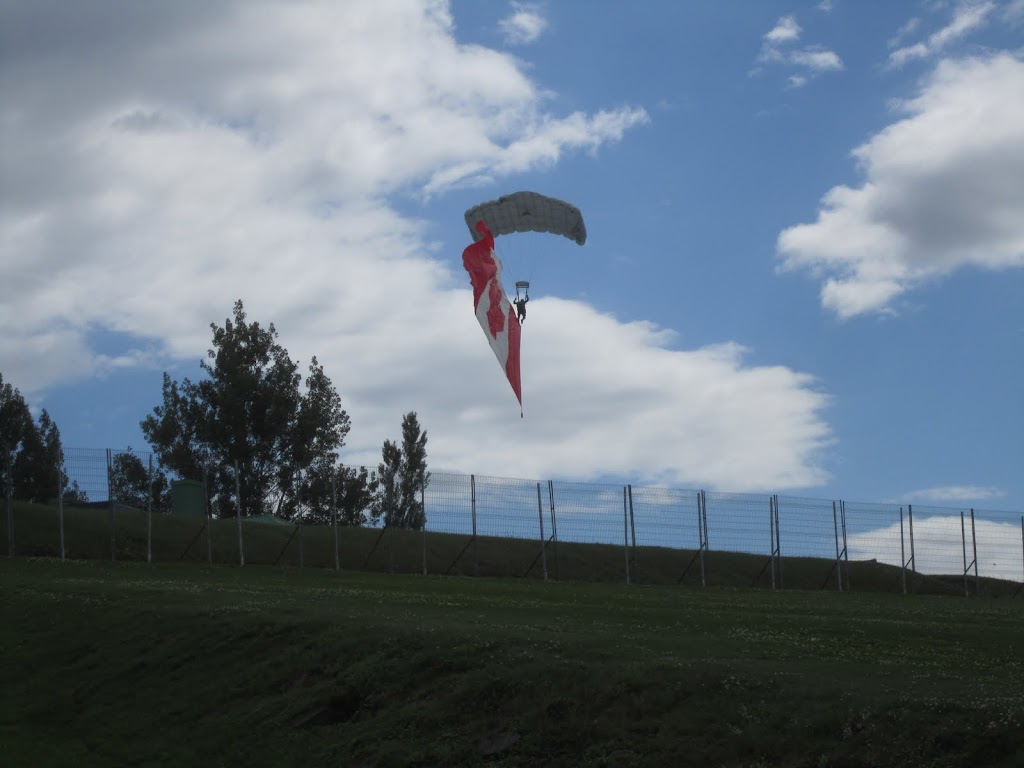 The old town district has a European feel with its streets on cobblestone and traditional looking architecture.  There are small windows with a balcony filled with flowers.  The walls of each building are of brick or stone and there are lots of restaurants with patio style seating. 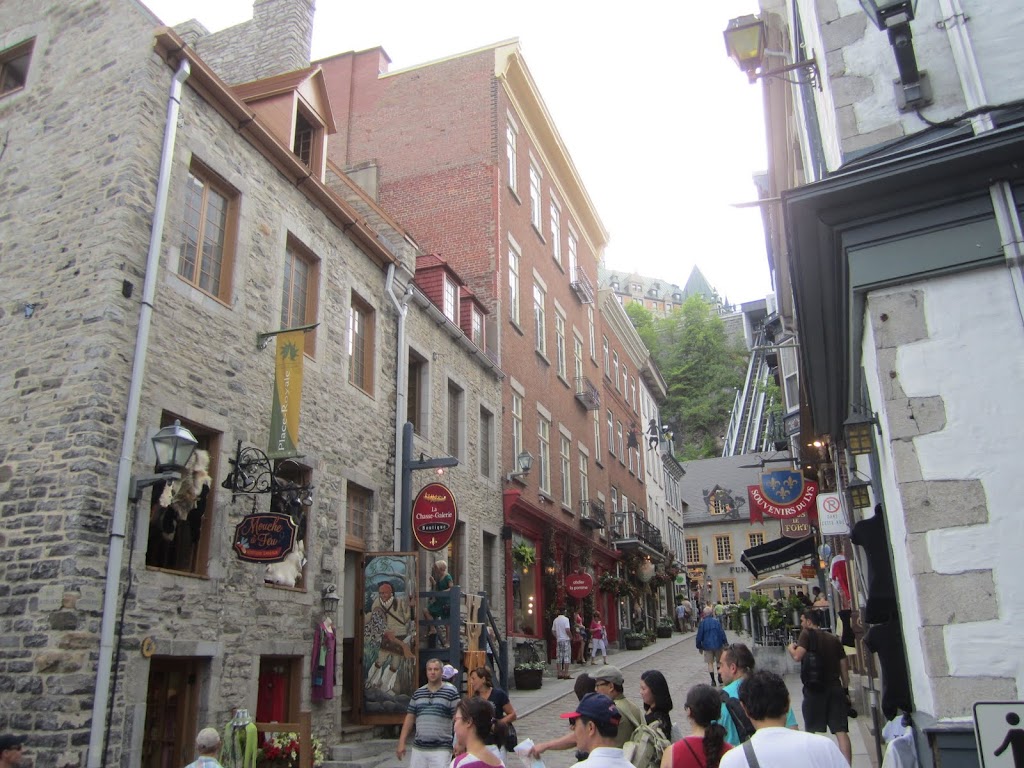 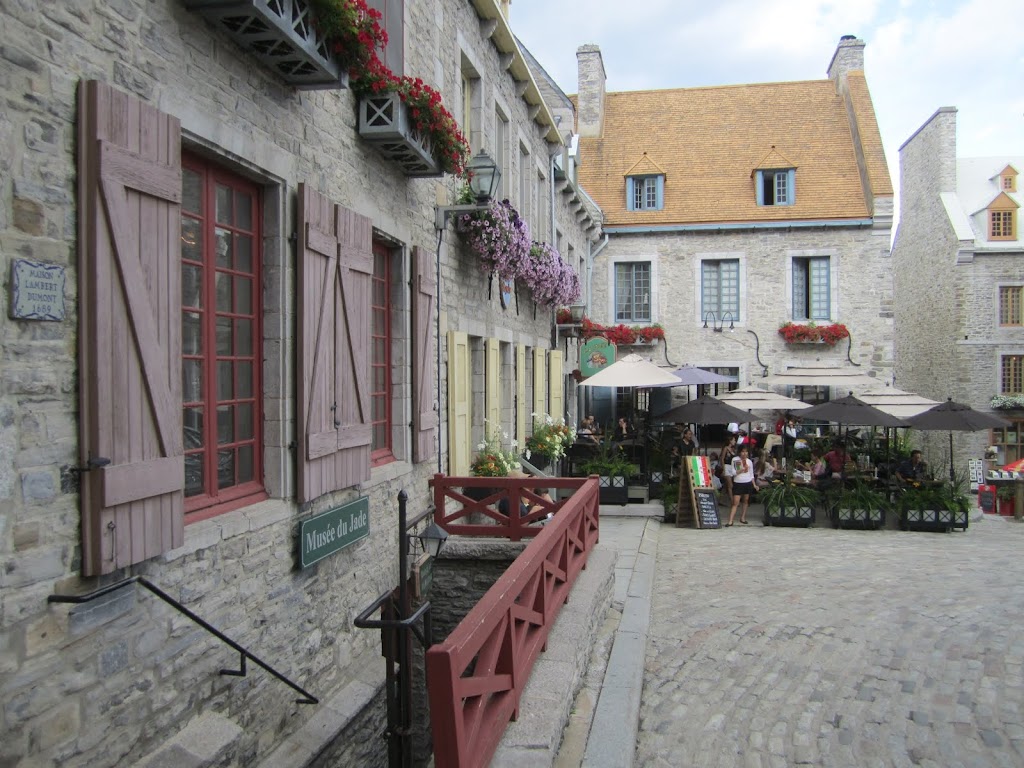 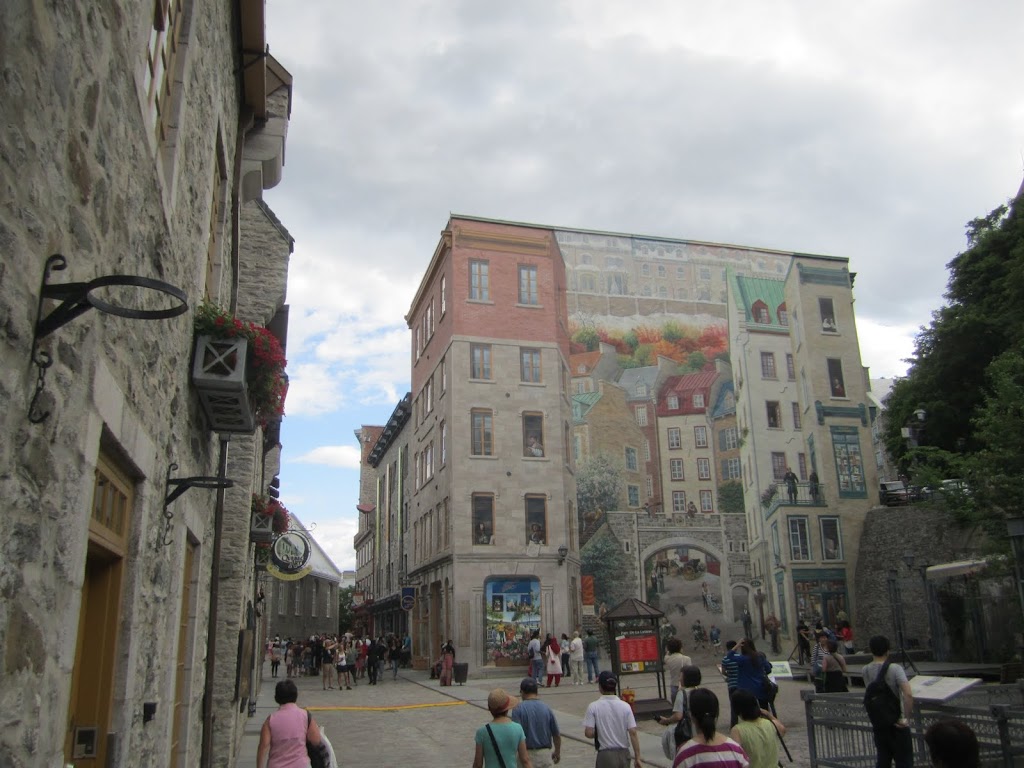 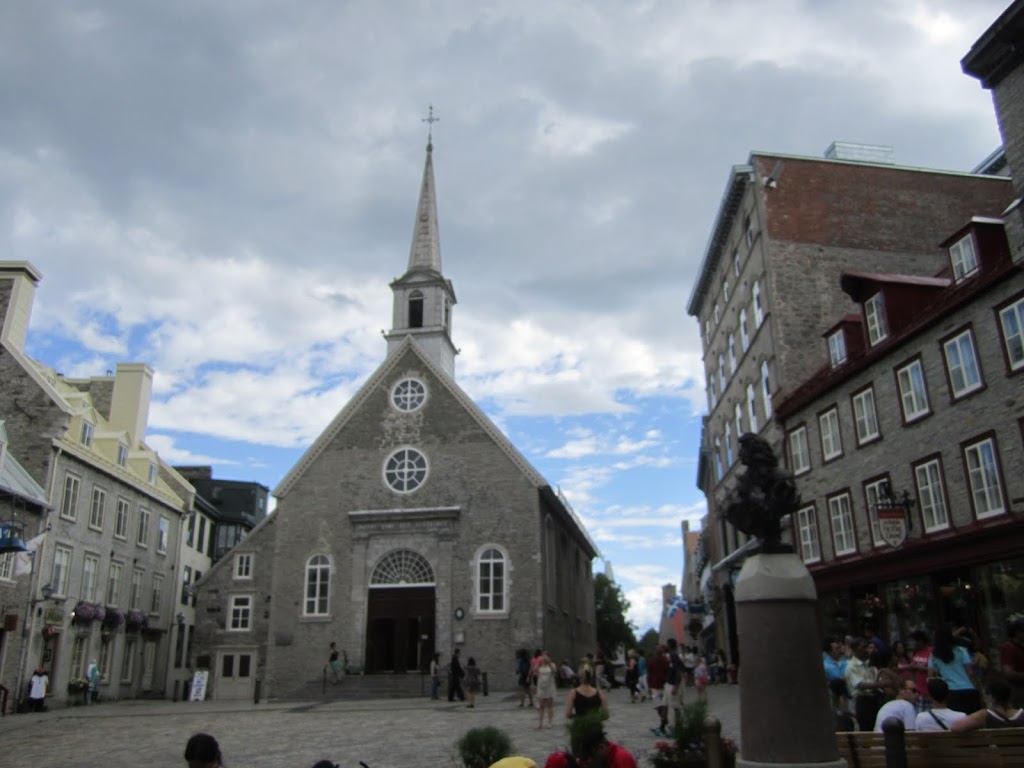 After a good walk through the old town, we sat down for a cold one…  The owner was a nice fellow.  He is Quebecois but is able to speak Mandarin as he had lived in China for three years.  Seeing us Chinese tourists, he had to show off what he knew.  He could read, write, and speak well.  He even jokingly shamed my cousin who couldn’t read and write Chinese.  The guy didn’t just know a couple of phrases, this guy was fluent (can probably speak Mandarin better than I can).  The restaurant even has staff that know German, Spanish, Portugese, Russian, one of the Middle Eastern languages (I don’t know how to recognize which one) and of course English. 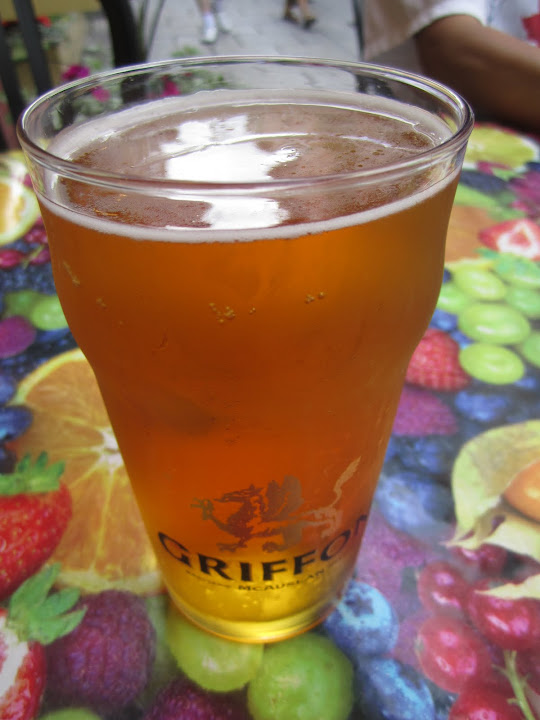 After this break, we concluded our tour of Quebec City and drove back to Montreal.  The next day, we would continue touring Montreal.